Albee’s Little Sand Resort II – Albee Compound is owned by my daughter and son-in-law, Angela and Dave Albee, though no longer ran as a resort. From 1968 to 1993, Dave’s family ran it as Albee’s Little Sand Resort. In 1993, they sold it to a nice couple who enjoyed many summers at the lake. For years, Angela and Dave visited and stayed there, memories of childhood always flooding Dave’s mind as he had a special bond with Little Sand Lake and always hoped one day to own a piece of it. That day did come and in February 2016, they closed on two cabins on Little Sand Lake. They look forward to many seasons at the lake.

300 foot of lakeshore to enjoy.

In April, 2016, we brought our Bass Tracker boat up to the kids cabin on Little Sand Lake. 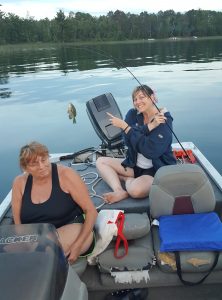 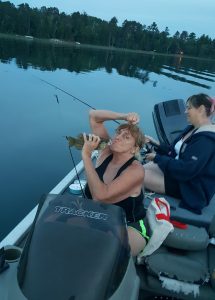 Sunning on the deck of the boat 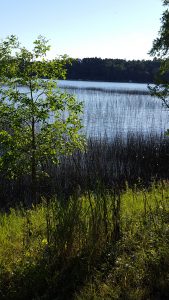 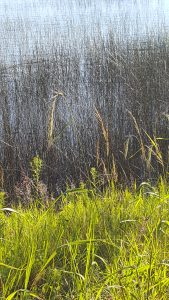 The lake front Dave and Angela had become overrun with reeds. With plans to build a dock these reeds had to be removed.

The reeds were removed by hand, looked like a big job but we all had fun doing it. 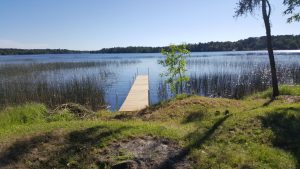 The new dock, with plans to extend it farther out

The canoe is ready, there’s a clear path to open water, how inviting.

What is a cabin on the lake without a bonfire.

Sometimes an early fire can warm you in the crisp early spring days.

At night, nothing beats the warmth of the fire, the crackling of the wood, and the bonfire scent that fills the air.

Now that is relaxation!

And when the day was over and we were tired from swimming, fishing the fabulous sunsets would bring closure  to the great times at the Albee Little Sand Lake Resort II.

The boat comes in real handy it you want to grab a meal at Zorbaz.  From the cabin to Zorbaz, it a short boat ride.

The staff, food and beverages all get a top rating from us.  We have several great meals  and we will definitely revisit  when we are back in MN.