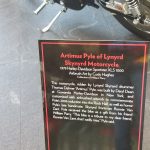 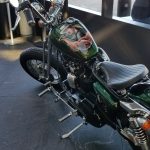 We can’t say it enough, Corp parks are beautiful. Mill Creek has a day use area plus a huge campground.  Because it is in Ohio, there is only electric hook ups.  There are drinking water stations around the campground to fill your fresh water tank. There is a dump station. 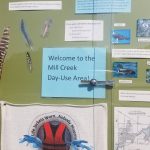 Mill Creek has very spacious sites.  Most are able to accommodate an RV and a screen tent or canopy.

The majority of campsites are in shade part of the day.

Although there are those in direct sun.

There is no designated beach area, but swimming is permitted.

Fishing and boating are also popular on Berlin Lake.  Ohio has a non-resident three day fishing license for only $19.00 which is reasonable.  Your license has to be worn on the outside of your clothing  so it can be spotted by the park ranger.

There are several playground scattered throughout the park for kids.

There is a small pavilion for groups to gather.

The park is well maintained.  restrooms and showers are available but not well kept and they could use a remodel.

The Park Rangers boat docked and ready to use when needed. 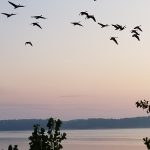 And of course the always fabulous sunset.

Enjoy your travels and stay safe.